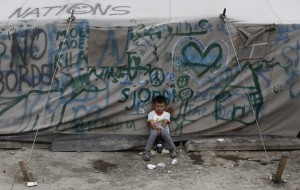 The campaign among some British leftists to stay in the European Union is mystifying & only highlights the theoretical degeneration of the left today. What about membership in the EU is so compelling after the austerities imposed on European countries & most wretchedly, after witnessing its military response to refugees from wars & sweatshop economics?

What will forever stand as condemnation of EU politics is its response to refugees, including tens of thousands of unaccompanied children & involving “losing” 10,000 children after they were processed for asylum.

Some say this is a moralistic response to EU criminality & not a political one–as if leftists somehow stand above a concern for human life by their deeper grasp of realpolitik; as if morality is just cheap sentimentality & pandering. If politics are not centered on the welfare of children & of the oppressed, who the hell gives a rat’s ass about your long-winded elaborations of the dialectics of power?

This little guy sitting forlorn at the Idomeni refugee camp on the Greek-Macedonian border is the center of world politics because his fate is tied to war, occupation, bombing, & human rights.