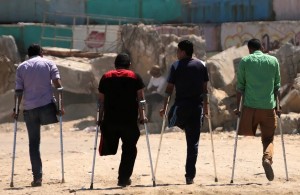 These four young men in Gaza lost their legs during Israeli bombing attacks. Which of the many Israeli sieges is not identified. It is estimated that 3,000 of the 11,000 Palestinians injured in the 2014 siege have permanent physical disabilities, including paraplegia, amputations, & permanent hearing loss. More than 1,000 of them are children.

Build & honor the economic, cultural, & academic boycott of Israel. Demand no aid of any kind to Israeli apartheid & colonialism.