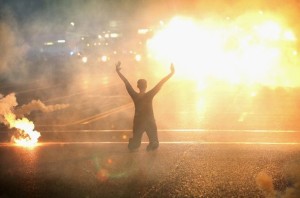 This is another image of the defiant young woman in Ferguson now kneeling before the barrage of tear gas & a phalanx of armored vehicles. We have not seen this kind of tough, mind-boggling courage in the US since the Civil Rights & Black Power movements of the 1960s & 1970s.

Dare we say a new era is opening up in the historic struggle against racist tyranny in this country? The achievements of the Civil Rights Movement of the 1960s continue to reverberate around the world amongst those who struggle against social hatred of every kind. A new day is dawning & the future began in Ferguson.