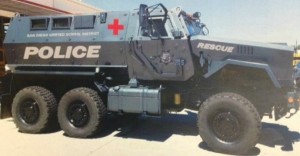 When the police department in Ferguson, MO, used extreme force & a high-tech military arsenal against the unarmed Black commmunity to prevent them from exercising their rights to assembly & free speech, many public officials (including Obama) & the media acted all aghast & began one of their hand-wringing debates about the militarization of police departments throughout the US. Well it’s about time, even if it is part theater & half-assed, since the problem is not a new one, at least not if you’re Black or Latino.

According to the official narrative in media, the militarization of city cops began with the development of SWAT teams under police chief Darryl Gates in Los Angeles in the late 1960s. SWAT is an acronym for “Special Weapons & Tactics” (originally named “Special Weapons Assault Team”). According to manuals, SWAT teams are to be used for hostage situations, shootouts, when suspects are presumed armed & dangerous, even suicide prevention. According to the media, the US War on Drugs (begun in the 1980s) pushed things out of control so that today SWAT teams execute routine warrants usually but not always under the guise of drug raids. And they do it with battering rams to knock out doors, lobbing grenades & tear gas into homes, & with high-powered rifles. Probably to practice their skills, SWAT teams across the US have performed alcohol inspections on bars; raided bars for suspected underage drinking; performed license inspections at barbershops; raided a gay bar where public sex was alleged; raided Amish farms & food co-ops suspected of selling unpasteurized milk products; raided medical marijuana dispensaries in states where they are legal; raided an organic farm suspected of growing marijuana.

Today the number of SWAT team raids are in the tens of thousands per year & the overwhelming majority of them are in the Black & Latino communities. The truth of the matter is that extreme police violence has always existed in the Black community & SWAT teams are part of a police strategy to maintain social control of the Black community. One need only look at the violence used against the Civil Rights Movement in the 1960s, including water cannons, attack dogs, mounted police. Police brutality is what ignited urban rioting in Black communities in the 1960s including the riots in Watts, the Black neighborhood of Los Angeles in 1965.

The media narrative claims Gates cooked up the scheme of SWAT teams after the Watts riots to deal with extreme situations. But the LAPD under the previous police chief William Parker was distinguished for racist brutality in Watts which is one of the issues that ignited the rioting. Gates first tested SWAT teams in a 1969 raid on a group of Black Panthers but they had previously been tested by police in Delano, California north of LA against striking members of the United Farm Workers union. The experience in Delano was used by SWAT teams in the LAPD to hone skills.

Gates was a particularly foul & unapologetic racist & anti-Semite who was forced to resign in 1992 as a result of his mishandling of the Rodney King incident. In 1991, King, who is Black, was viciously beaten by four white cops. A bystander videotaped the incident which put LAPD violence against Blacks under an international spotlight. An all-white jury acquitted the cops in 1992 which led to further rioting in Watts. Gates who held that casual drug users should be shot & claimed Blacks didn’t fare well in police chokeholds because their physiology was different from “normal people” responded to criticisms of his handling of the King case by saying, “Clearly that night we should have gone down there & shot a few people. In retrospect, that’s exactly what we should have done. We should have blown a few heads off.”

Gates was a loose cannon & a thug & likely not the architect of SWAT teams. It’s far more likely the US government–which was terrified of Black rebellion across the country as well as the Civil Rights & Black Power movements–was using Gates & the LAPD to test & develop a strategy for social control of the Black & Latino communities. The so-called War on Drugs was part of that strategy to justify turning Black communities into martial law zones & preempt the Bill of Rights, particularly regarding illegal search & seizure, probable cause, & due process. As a result thousands of Black teens were railroaded into prisons falsely accused or for minor offenses that deserved nothing more than a “tut-tut” & a wink. Blacks kids were sentenced to life without parole for simply smoking a joint.

When the majority of people in the US bought the narrative about Black narco-terrorist gangs & allowed police to run roughshod in the Black community without protest, they allowed a wholesale assault on the Bill of Rights for everyone. This is where that “An injury to one is an injury to all” thing gets played out in technicolor. Because by 1999, at the Seattle WTO protests, the cops came in full commando regalia. Today you can’t even have a protest sing-along in the park without cops showing up in riot gear. The extreme violence that goes back decades in Watts & other Black neighborhoods is a seamless whole with police brutality under the guise of the War on Drugs, with the violent attacks on Occupy protestors in 2011, & with the violent attacks on the Black community in Ferguson.

This photo is a $700,000 armored vehicle recently given to the San Diego Unified School District for kids from preschool to the 12th grade. They were given the “mine-resistant ambush protected vehicle” (MRAP) built to withstand armor-piercing roadside bombs by the Pentagon under the same program which supplied the Ferguson cops with MRAPs, tear gas, assault rifles, grenades, battering rams. Clearly the Pentagon is being over-funded if it has billions of dollars of weapons to give away. But more likely, the program is a scam & is part of US government strategy to contain the social unrest they got an alarming preview of with Occupy & with Ferguson. Handing this vehicle to school cops is a troubling escalation that needs to be nipped in the bud.

Nothing terrifies the rulers of this country more than the rebellion of Black teens & the politicization of the Black community. Economic policy in this country & US military policy is completely dependent on racism. But to those who want to see a world fit for human beings in live & love in, the development of Black rebellion & solidarity with it, is a cornerstone to social transformation. If you want to know where the leadership of social change in the US is coming from, look to the young woman from Ferguson who knelt in the street against a phalanx of MRAPs & a barrage of tear gas.