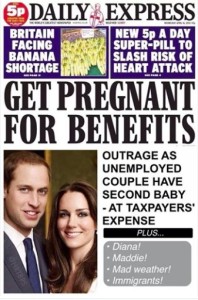 The Twitter-sphere & social media are a-sputter with indignation at news that Willy & KKKKaty are having a second child who will be raised on the dole, paid for lock, stock, & barrel by taxpayers. Now indignation is a virtue, not an indulgence–& certainly not an emotion to be frittered away every time we’re run around the block by excesses of the 1%. So the question is, what made this news? Because moochocracy has never ever been anything but a glorified welfare class. Their very survival is testimony to the largesse of the welfare system. For those living in nations that trounced feudalism a few centuries ago, it is also testimony to the need for political modernization in England.

The time for indignation over Willy & KKKKaty might be somewhat belated since last year it was announced renovation costs on their four-story 20-room palace were already at $6.6 million & rising. A Buckingham minion explained the renovations weren’t reckless or extravagant since the palace was their one & only “official residence” where they plan to stay for many years to come. A few questions arise: (1) Tell us about those “unofficial residences”. (2) Does Buckingham expect this romance to be unfettered with the nonsense that beleaguered so many earlier dynasts in the same clan? We’d leave gossip to the tabloids except that $6.6 million moves the matter from dishing gossip to grand larceny.

Here’s where indignation might come in handy. While renovation costs were adding up, the British government was making access to welfare benefits much more stringent to trim “widespread abuses” of the system–cleaning up the old “welfare chiseler” scam. Part of the reforms included eliminating benefits for those in public housing who had more living space than government bureaucrats deemed necessary–like an extra bedroom. The so-called “bedroom tax” reform would have evicted thousands, including elderly & disabled people. So in the interests of public accountability, another question arises: Why wasn’t Willy & KKKKaty’s palace included in the bedroom tax reform? Because by the new welfare calculations, they have 16 rooms over the limit & their welfare check an overage of at least $6.5 million. What’s up with that England!?

In this news of the birth of a new welfare chiseler there is a silver lining: the less than redoubtable Harry will be one more step removed from taking over Betty’s role as chief hand-waver of the nation.