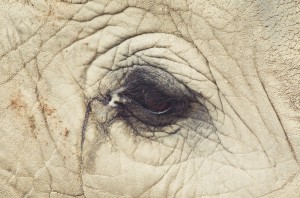 Most animal lovers respond viscerally to seeing animals caged in zoos & we are often accused of anthropomorphizing animals who, the accusers say, operate by instincts & not emotions. We can only hope the accusers never have a dog to gnaw on that prejudice based in the outdated schema of “The Great Chain of Being.”

I have always been most struck by caged gorillas confined to settings constructed of plastic & without the smells & sounds of nature. Most often they sit with their backs to the viewing public, picking nits, looking miserable. A zookeeper I once met while viewing a gorilla explained to me the gorilla was not at all as miserable as he looked; in fact, he was intellectually stimulated every Thursday when they hid his food & made him hunt for it. This is when you’re wishing King Kong will show up.

In a local zoo in St. Paul, MN, I’ve seen parrots, high-strung by nature, chained to their perches in noisy, trafficked areas where their nerves must have snapped from overstimulation. I’ve seen giraffes confined during several winter months to cement rooms the size of a toilet stall where they are unable to turn or sit. And we won’t even talk about what we’ve seen in circuses.

This photographer shot these photos of animals at his local zoo because he was struck by the sadness in their eyes. He wanted to see if “the eyes are the windows to the soul” was true for animals as well as humans. The grieving eyes of animals are the dead giveaway to their emotional lives. Many have also noticed that if you coo to an animal–quietly, soothing, even apologetic–they all respond like children do because they feel (not instinct, but feel) empathy.

This is the eye of an elephant–& there is probably no more abused animal than this magnificent creature. If you look at the entire album, you will see proof that animals do indeed have emotions &, like us, their eyes are the window to their souls”.