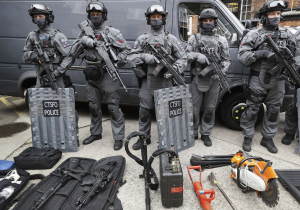 These counterterrorism officers are the new London bobby, historically heralded for not carrying weapons other than truncheons. According to news reports, for now only 10 percent will be attired like combat troops. But that “for now” may only mean until they can suit up the other 90 percent.

Traveling in England in the 1970s, I came home late evening from an engagement & was blockaded from my quarters by police barricades set up for the annual West Indian parade near Ladbrooke Grove. Most of the revelers had gone home but the bobbies were out in force waiting for trouble from groups of youth. I had to travel by foot quite a distance through manned barricades at every corner, explaining to the bobbies where I was going in order to pass. I was plaintive, desperate, ingratiating.

The unarmed bobbies treated me in an extremely aggressive way, interrogating & taunting me as though I were looking for trouble. The fact that they couldn’t pull out a gun & shoot me was not assuring & I was very scared. Just as I arrived to where I was staying, I saw a small group of black kids walking & knew they were in for trouble. Next morning’s newspaper confirmed there was a confrontation, beatings, & arrests.

Knowing how aggressive the bobby could be unarmed, it is not assuring of public safety that they will now work it in battle gear. This is the security of life under neoliberalism, the barbaric phase of capitalism.