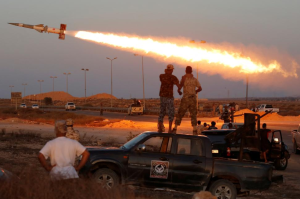 These are militias in Libya allied with what media calls the “UN-backed regime” (as opposed to the competing regime) reportedly firing a rocket at ISIS fighters. There are no reliable analyses about what is going on in Libya but for a while there has been a military build up including warplanes on standby from Britain, France, & the US & deployment of US special forces & military advisers–& of course the flow of weapons. According to a Pentagon general, “There will be a long-term mission in Libya.”

So much for the malarkey about US-NATO liberating Libya from Qaddafi. One doesn’t have to have supported Qaddafi to assert that turning Libya into a killing field is not the preferable option to dictatorship. Because in the process of “liberating” Libya, US-NATO warplanes crushed the developing popular revolution against Qaddafi.

Unable to draw the lessons of US-NATO barbarism in Libya, some prominent anti-Assadist activists are now using Libya as a model for what should be done in Syria to end Assad’s rule. They want the US to intervene militarily against Assad–as if it would enter to support the popular revolution against him.

As is the way with militarism, bombs talk louder than delusions. The US has joined Syrian & Russian warplanes in bombing the hell out of Aleppo. Still, with delusions undaunted, these so-called Syrian revolutionaries call aggressively for Hillary Clinton to be elected president since she promises a more aggressive military campaign against Assad than they think Obama has conducted.

Is this image from Libya the vision they have of Syrian emancipation from Assad? Can they point to a single instance in the past 150 years when US military troops & warplanes played a humanitarian role? Can they point to a single instance of where Clinton played the role the role of a peacemaker rather than a war-mongering agent of the Pentagon? They can’t because their delusions & pipe dreams blind them to reality.

There is no militarist solution to the problem of dictatorship. The only alternative is popular revolution which US policy thwarts in every way, including with CIA operatives, bombers, & fostering illusions in the credulous who look for salvation in bombers.

The only solution is to rebuild the international antiwar movement demanding the withdrawal of all foreign militaries from Libya, Syria, Afghanistan, Iraq, Pakistan, Somalia, Kashmir. Peace is not brokered with bombers & those who claim they do have their heads stuck up their asses no matter how ardently they promote war through extermination.