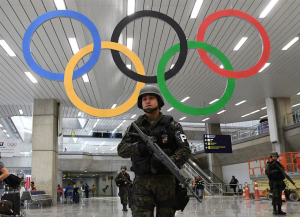 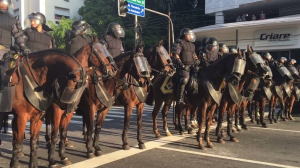 The Olympic games 2016 have begun with quite a splashy opening ceremony & thousands protesting in the streets against the extravagance for the super-wealthy of the world while a handful of Brazilians will only see the games while selling peanuts in the galleries.

According to Olympic mythology, the purpose of the games is to “promote peace & unity within the international community through the medium of sports & “as a way to bring political enemies together.” Well it certainly brings enemies together which explains why Rio is militarized & armed to the teeth for the purpose of oligarchic unity against its own people.

The first photo is soldiers patroling the airport in Rio as athletes arrive & the second photo is mounted troops at one of the protests against the excesses of the games while Brazilians suffer increasing impoverishment to bankroll them for the world’s elite. A case of bread & circuses for elites?