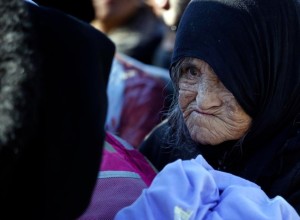 What those whipping up anti-refugee hysteria forget is that we cannot un-see what we have already in hundreds of photos showing refugees to be mostly families, including elderly, small children (often unaccompanied by parents), disabled. That’s as true of immigration from the Middle East as it is for those from Africa. There’s no way they can be turned into terrorists ‘threatening the very foundations of western civilization’–though that might be a good thing if it shakes the colonial mentality to its roots.

This woman is waiting in one of the mile-long lines to register with police at a refugee center in southern Serbia. It’s reported refugees are anxious lest Europe use the Paris attacks to close the borders. Most of the borders are already closed.

The xenophobia & political agendas of European regimes have created a massive human rights crisis on their borders. They can’t actually believe they can strand tens of thousands of people like this woman in the dead of winter? Or are they that insane?

Immigration is a human right. Open the borders. Organize against their damn wars!