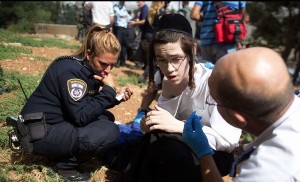 The Guardian-UK has the headline: “Six dead as violence continues in Israel & Palestinian territories.” Calling it “violence” rather than a a violent rampage by Israeli soldiers is a foxy way of equating Palestinian self-defense to aggression when the article goes on to show that the people getting killed are Palestinians shot by IDF soldiers.

This photo is another example of that kind of sleazy journalism which prevailed in media until BDS turned that narrative on its ass. The caption says: “An ultra-Orthodox Jewish teenager is treated by a medical team after he was stabbed by a Palestinian man in Jerusalem. An 18-year-old Palestinian was arrested after a 16-year-old Jewish teenager was stabbed near a main road separating Orthodox Jewish neighborhoods from Palestinian districts.” This is one of those stories where the devil is in the details.

Where was our ultra-Orthodox lad when he got stabbed? And what was he doing there? Was he in a gang of extremists at the Noble Sanctuary compound trying to get entry to vandalize the mosque? Was he taunting or beating on a Palestinian? Was he prowling East Jerusalem looking for trouble with Palestinians who not only can’t pray without soldiers standing over them but who are under martial law? Or was he just ambling down the street in a martial law zone minding his own business? We trust his injuries are minor, if existent at all, but would like to know what happened to the alleged attacker. Pardon us if our credulity has been taxed to the max by 67 years of lies.

From the NY Times to Israeli tabloids, the story is Palestinians are getting shot after attempting to stab Israelis. But according to the Palestinian Ministry of Health, in just the last ten days, 14 Palestinians were killed by Israeli soldiers & 1,000 were injured by rubber-coated metal bullets, live ammunition, tear gas inhalation & suffocation. Some Palestinians, like in Gaza, are getting fatally shot at protests, some at checkpoints. An unarmed Israeli Palestinian woman with her hands in the air was shot in cold blood at a petrol station. Can Israel report a single incident of a fatality where the perpetrator was Palestinian & not just alleged to be? For that matter, outside the death of the two Israeli couples allegedly by Palestinian gunmen, can they point to any fatalities or injuries at all? Because 1,000 injured Palestinians is a daunting comparison.

Palestinians grieve & bury their dead–as those in Kashmir also do–with massive political protests honoring their martyrs. Their losses are profound. Our solidarity must also be massive with emergency rallies & building the hell out of the economic, cultural, & academic boycott of Israel (BDS).