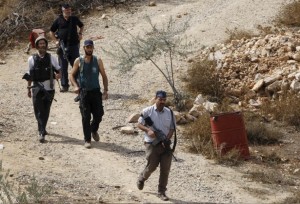 The caption to this photo in a Reuters report said: “Israeli security guards carry their weapons during clashes with Palestinians in the West Bank city of Hebron, October 9 2015.” Doesn’t it look straight out of the movie “Exodus,” which romanticized Zionist terrorists & death squads taking over Palestine as freedom fighters? So has Israel deputized the settlers now as “security guards” & adjuncts to the army so they can go after unarmed Palestinian protesters with assault weapons?

On the same news day, Reuters had a headline saying: “US says it considers violent acts against Israel as terrorism.” John Kirby from the US State Department tried to talk out of both sides of his ass when he said the US “condemns in the strongest possible terms violence against both Israeli & Palestinian citizens.” But then he continued his flatulent condemnation by saying the US considers the violence, the “stabbings & killings there, particularly in East Jerusalem, as terrorism.”

After the bombing of the hospital in Afghanistan, does the US have a moral leg to stand on to condemn anything, anywhere, anyhow? More importantly, what about the killings & shootings & barbarisms against Palestinians at Al-Aqsa, in East Jerusalem, Gaza, the West Bank? What about the marauding death squads in the West Bank, the deputized thugs with assault weapons going after Palestinians with sling shots?

There’s only one way to cut the crap on all this & that is to hold emergency rallies around the world in defense of Palestinians demanding no aid to apartheid Israel & to build the hell out of the economic, cultural, & academic boycott of Israel (BDS).