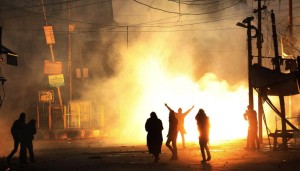 There appears to be a slight change in media editorial policy where the struggle in Kashmir actually gets mentioned occasionally–though there was some coverage of the massive floods last year, the possible regeneration of the country as a tourist destination, & beef smuggling since India banned eating beef–ostensibly because cows are sacred to Hindus but really as a way to impose restrictions on & persecute Muslims & other religions who do eat beef. (This post is not about the merits of vegetarianism but about democratic rights.)

The problem is that just like media coverage of the conflict between Israel & Palestinians, every attempt is made to confuse or keep people stupid about the source of conflict between Kashmiris & the Indian government. It wouldn’t be exaggeration to say it’s rendered obscurantist to make Muslims appear irrational & belligerent–an image that feeds the neoliberal gestalt of Islamophobia running rampant since 9/11.

An example would be the caption to this photo about protests yesterday in Srinagar, Kashmir. It read “Kashmiri Muslim protesters shout slogans amid exploding smoke canisters fired by the Indian security forces during a protest in downtown of Srinagar, the summer capital of Indian Kashmir, December 4, 2015. Police fired dozens of tear gas canisters & rubber bullets to disperse protesters staging a demonstration after Friday prayers outside Kashmir’s main Mosque, Jamia Masjid, against the Indian government.”

So based on this caption, with no accompanying articles, are we to believe the cause has something to do with religion? It was after all Muslims protesting after prayers outside a mosque. Or does it have to do with what is unstated here but should be a necessary part of any explanation–i.e., the brutal occupation by 700,000 Indian troops & thuggish paramilitary forces who engage in violence against stone-throwing youth, summarily execute activists, disappear, rape, torture, incarcerate, & murder thousands?

India now apparently has a troubling arrangement with FB–just like Israel is suing FB so it will censor the truth of Israeli apartheid & ethnic cleansing of Palestinians. India also closes down the internet in Kashmir so the truth of their occupation cannot be exposed before the world. This makes clear that the democratic rights of free speech & association are jeopardized for all of us when the oppressed stand up & defy tyranny. That is why their struggle is our struggle.

Our fullest solidarity with their struggle to end the occupation & achieve self-determination.