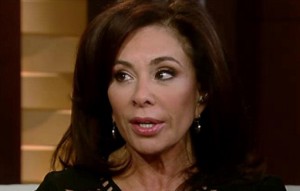 Judge Jeanine Pirro is a former TV & county judge & district attorney, now a Fox news commentator. She thinks the title gives her cachet but she blows it every time she opens her big mouth–even when her audience is the likes of fellow xenophobes & Fox commentators Geraldo Rivera & Elizabeth Hasselbeck. The three trash-mouths give Trump & Ben Carson a run for their money.
Yesterday she said “There are jihadists out there… who want to kill all of us because of our way of life… We have to understand that we can no longer be politically correct.” She wants to restrict immigration & “be able to call Muslims terrorists” & inexplicably denounced Obama for standing in the way of this.
It was almost exactly a year ago that Pirro made news for her comments when a Staten Island cop using excessive force was not indicted for killing Eric Garner by holding him in a chokehold (in July 2014). On her TV show, Pirro defended the excessive force saying the public needs to be trained to show more sensitivity & obedience to cops. Curious advice from Pirro because she & her gangster ex-husband rose to high social status in New York by flouting tax, real estate, election, & criminal laws.
She’s a social climber from Westchester County (north of NYC), married for nearly 40 years to Albert Pirro (divorced in 2013), a hustler & once Westchester’s most influential real-estate lawyer who made his fortune working as the legal muscle for real estate developers, including some with mob connections. Donald Trump kept him on retainer for development projects & politicians like Governor Goerge Pataki used him to rake in clients’ money for campaign donations.
In 2000, Albert got bagged for 66 counts of federal tax evasion & fraud on their personal wealth, including stashing over $1 million from the IRS. He was never prosecuted for his mob connections or for buying her elective offices in Westchester because of his fundraising skills & because they invited all the highest officials in the state, including the governor, to their mansion for parties. She was never prosecuted for sharing in the income tax fraud but was investigated for illegal wire tapping Albert for two-timing her. That milieu is where Pirro got her sensitivity training.
After his release from prison, Albert had more run-ins with the law including fisticuffs against restaurant staff & girl friends–people he considers his inferiors. He was prosecuted for disorderly conduct & unlawful restraint after roughing up his girl friend & not allowing her to leave a restaurant.
Some call it irony that Pirro, a tough-talking former judge & three-term district attorney who wrote a book titled “To Punish & Protect: One DA’s Fight Against a System that Coddles Criminals” would herself be living on the edge of crime. That’s where those mob connections & friends in high places came in handy–& the fact that she’s so practiced in the art of kissing ass.
Pirro once made People magazine’s Most Beautiful People List. That’s better than having her mug shot on the walls of the post office. If there’s one thing she’s good at, it’s feathering her own nest, kissing ass to those she considers superior, & a nasty racism, including toward people of the same political genre like Barack Obama.
She once ran for US Senate as a Republican against Hillary Clinton & lost. The only difference between them is the color of lipstick. Voters must have thought her more corrupt than Clinton. And wow, is that a damnation.
(Photo is Jeanine Pirro)