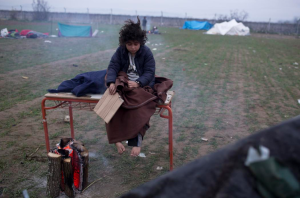 We’re led to believe that refugees from Pakistan, Iran, Morocco & other places in north Africa, who are being stopped at the Macedonia/Greece border & prevented from moving north are mostly young men. Not that this should make a shred of difference to their rights of asylum, because historically immigration has always had such gender imbalances–for the obvious reason that it’s dangerous for women to travel anywhere in this world unarmed or without male protection.

One exception to this was the large numbers of unaccompanied Irish women & girl immigrants traveling to the US at the turn of the 20th century. Another one is the massive numbers of young Central American women with children now crossing the US/Mexico border to find asylum.

In fact there are many women & children among those refugees being prevented from moving north from Greece & now living in extremely dangerous conditions. It’s winter, it’s raining, they have no shelter, food, healthcare. One young Moroccan man was electrocuted to death trying to mount a train carriage & there was no place to put his body or bury him with respect.

This will not change until an international solidarity movement is built demanding international refugee & immigrant law be applied & asylum be granted for whatever reason–political or economic.

This little girl is an Iranian child warming near a fire as she waits with others not allowed to cross the border–many who are protesting their debarment.

Immigration is a human right. Open the borders. It’s an issue of child welfare.