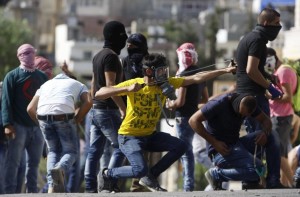 Media now says the 30 Palestinian fatalities included “children & assailants.” They neglect to add, Israel doesn’t make a distinction between the two because every Palestinian is a “terrorist.” The inclusion of “assailants” is a very deft move because it justifies the discordancy. It stands to reason if Palestinians are on a stabbing spree that many would be executed on the spot, right? So where are the forensics on these shootings? Where are they taking place? In East Jerusalem or the West Bank? What about the six shot dead in Gaza across the fence? Are the streets of Jerusalem strewn with stabbing victims? Is this affecting tourism?

Media doesn’t ask for evidence any more than Obama when he condemned Palestinians as terrorists. They know exactly what’s going on but it’s their job to provide the propaganda soundtrack to ethnic cleansing.

We can expect this kind of media rubbish to continue & work itself into a white heat because BDS is gaining ground. If the Israeli colonial project is to survive, they must regain control of the narrative about Palestinians–the old apartheid song & dance about terrorists.

Palestinians have weapons on their side now–beside their slingshots, that is. They have international solidarity, which uses social networking, educational events, & public protests to tell the truth–which is the least justice demands.

Israel talks about shivs but all we see are slingshots. All we see are Israeli troops occupying East Jerusalem, the West Bank, & bombing Gaza with tanks, tear gas, & assault weapons.

These activists are fighting the illegal occupation near the West Bank town of Bethlehem. We cannot let them stand alone against one of the most barbaric armies in the world.