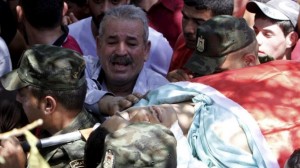 If many remain hopelessly confused about the struggle between Palestinians & Israel, it is because media around the world work tirelessly to make us stupid. But the truth is now erupting; the lies were bombed to smithereens by Israel last summer.

This is the father of 19-year-old Mohammed Alawneh at his son’s funeral today in the West Bank village of Bruqin. Young Alawneh was shot & killed by Israeli soldiers “when clashes broke out with residents” after troops raided the village to make arrests & residents threw stones at them. The Israeli military called the stone-throwing a “violent riot” & claimed troops called on the crowd to stop hurling rocks “before they opened fire at the main culprit.” Opened fire on a guy throwing rocks!?

One media source said “Israeli troops enter Palestinian-controlled territory frequently to detain people suspected by Israel of militant activity. The Palestinians condemn this practice as an encroachment on the limited self-rule they hold in parts of the West Bank.” Did you ever read a more remarkable description of military occupation? Did you ever read a more dishonest crock about Israeli troops permanently stationed in the West Bank to protect Zionist settlers from all over kingdom come as they dispossess Palestinians!?

Another media source said the murder of Alawneh “came after weeks of low-level violence in the occupied Palestinian territories & amid regular Israeli arrests in the West Bank.” Perhaps we need them to explain how they define “low-level” since those being regularly arrested, those whose villages & homes are being raided, those whose lands are being expropriated, those constantly stopped at military checkpoints, those attending the funerals of their children & neighbors, might not see it the same way.

The same source then went on to note that the “low-level” of violence was not from the occupying troops but by Palestinians: a young man who “opened fire at troops”; one who stabbed an Israeli policeman in “Israeli-annexed” East Jerusalem; & five who were arrested as suspects in the murder of an Israeli settler in the West Bank. But what about the tear gas, stink bombs, grenade canisters, violence against Palestinian children, arrests of hundreds lost in the Israeli gulag–because from the Palestinian point of view, the violence is pretty high-level?

The only way to counter media dissembling is to build the economic, cultural, & academic boycott of Israel. Long live Intifada!

Our deepest sympathies to the family of Mohammed Alawneh. May he RIP.