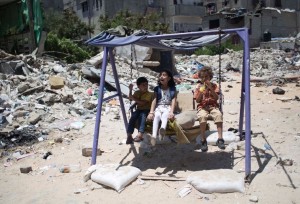 The caption to this photo read “Palestinian children play on a swing near the rubble of buildings, reportedly destroyed during the 50-day war between Israel & Hamas militants in the summer of 2014, in the southern Gaza Strip town of Rafah.” You can sure pack a lot of baloney into one short sentence.

Media is just going to have to get over the delusion they’re kidding us. The entire world stood witness to Israel’s barbaric siege of Gaza. It was Israeli bombers, not evil fairies from outer space that destroyed Gaza & reduced it to rubble. There was no war but a genocide. What else do you call it when the most sophisticated & powerful military in the world goes after unarmed civilians? As for Hamas rockets taking out Israeli targets? Show us the proof? Take a few pictures of all the alleged damage–& a few potholes in Sderot won’t cut it.

What media might have said about this photo is that those children in Gaza who survived are traumatized, not only playing but still living in cement rubble because the Israeli blockade will not allow them to rebuild.

And what we would like to say to the children of Gaza is that we commit to building the economic, cultural, & academic boycott of Israel because your struggle for justice is our struggle. Long live Intifada.