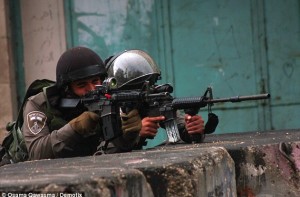 Media is operating in overdrive trying to justify Israel’s rampage at Al-Aqsa, in East Jerusalem & the West Bank with comments like this:

“Palestinian assailants carried out a series of stabbings across Israel.” (Like spontaneous combustion, Palestinians with knifes rose up across Israel? Any evidence of such a phenomenon?)

The site of Al Aqsa, “revered by Muslims & Jews, has been the scene of recent protest after Palestinians responded by barricading themselves inside the mosque & hurling stones, firebombs & fireworks at Israeli police.” (What were Palestinians responding to? Extremist thugs trying to vandalize the mosque? Israeli riot police firing rubber-coated metal bullets, stun grenades, pepper & tear gas right at their heads? Shouldn’t somebody tell the whole story?)

“Leaders on both sides have called for their people to put an end to the bloodshed.” (See how impartial media is. They place equal blame on the Israeli rampage & Palestinians defending themselves.)

Sometimes a picture is worth a thousand lies. Like this one of Israeli police taking aim during “violent clashes in the West Bank.” ‘Violent clashes’ of unarmed Palestinians against tanks & other armored vehicles, assault weapons, stun grenades, live ammunition, pepper & tear gas. The caption to this photo tried to make military aggression look like self-defense by adding they took aim “after an Israeli soldier was stabbed.” Not “allegedly” stabbed?

It must never be forgotten that Israel is an occupying army supporting thousands of settlers from all over Kingdom Come moving in to take over Palestinian land by waving a deed from the Old Testament. If Palestinians defend themselves & a soldier gets caught in the crossfire once in a while, that’s too bad.

The only way to oppose media lies is to build the hell out of BDS, the economic, cultural, & academic boycott of Israel & to demand no military aid to Israel.