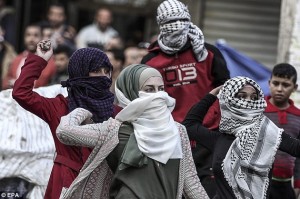 Just so the relationship of forces is crystal clear, this is a photo of those identified by Israeli police as “female terrorists” here “throwing missiles in anger over Israeli security measures at Al-Aqsa mosque.” How do you turn a rock into a “missile”? Are they also high-velocity & guided?

How irascible those Palestinians get when denied entrance to worship at the mosque, when they protest against Israeli extremists & “tourists” trying to vandalize the mosque, when they stand with rocks against live ammunition, stun grenades, & tear gas! If they just peacefully submitted to apartheid & ethnic cleansing, would there be no need to go after them with full military might?

Israel is attempting to provoke Palestinians so they can come down on them with the full arsenal of repression & violence. This is a call to arms for Palestinian supporters to hold emergency rallies & to continue to build BDS, the economic, cultural, & academic boycott of Israel.