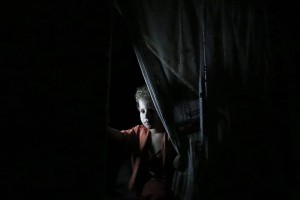 The Guardian-UK caption to this beautiful photo is a classic–another case of media not always outright lying but never telling the truth about Palestinians & Israel:

“Four-year-old Haifa Al Atawna looks out from the window of her family’s destroyed house after nightfall during a power outage in Al Shejaeiya neighbourhood. Residents of Gaza, home to 1.8 million people, have been experiencing up to 18 hours of electricity outage a day for the past two weeks due to fuel & power shortages.”

The full truth is the Shejaeiya neighborhood was bombed to smithereens by Israel this time last year & little is left but cement rubble. Since Israel won’t allow rebuilding, people are living in that rubble which shifts & is dangerous. The fuel shortages are caused by the Israeli blockade & the power outage by the bombing of the only power plant in Gaza. And anyway, even if they had fuel & power, how would they use it in a pile of cement rubble!?

No wonder people feel the Palestinian conflict with Israel is too daunting to understand & too intractable to be resolved. You can’t make sense out of lies, half truths, & outright gibberish. But the truth is now out & justice won’t be stopped.

Build the hell out of the economic, cultural, & academic boycott of Israel & demand no military aid to Israel.