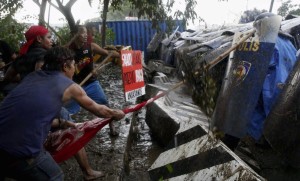 Filipino activists are a constant inspiration & model of toughness; we’ve seen them grab water cannons from riot police & turn them on the cops. Over & over, we’ve seen them do pitched battle with riot police & bulldozers sent to forcibly evict them from slums. There isn’t a US politician who arrives in Manila without antiwar protesters out demanding ‘US military out of the Philippines’. Here they’re taking sticks after riot cops trying to stop them from marching to the congress in Quezon City (a section of metro Manila) where president Benigno Aquino is delivering his state of the nation address. Their placard is translated as “Increase the salary of workers, lower down the prices of goods.”

Quezon City is a frequent site of street battles between slum dwellers & police since it has been targeted for massive infrastructure & gentrification projects, including upscale shopping malls, telecommunications centers, high-rise luxury apartments, hotels.

The Philippines played a major role in the Vietnam War by providing air bases & ports for the US military. They were closed in the 1990s–leaving behind an estimated 52,000 children fathered by US soldiers during the decades the US navy & air force had the bases. Many of the kids were abandoned by their mothers & became street children; most were raised in extreme poverty by family or guardians & suffered intense discrimination as “Amerasians.”

Because the US military administered prostitution at the Filipino bases, the women who worked as “bar girls” (a demeaning term) sued the Pentagon in the 1990s. It’s uncertain what happened to that suit (it likely didn’t go far) but there are initiatives by women in other countries with US bases, including South Korea & Japan, challenging US military policies that create such social disruption & human suffering. Those initiatives need to be supported & encouraged since the re-militarization of the Philippines & re-opening of the bases will bring the same social catastrophes. Opposing that is not just for Filipino activists but for antiwar activists in the US & around the world.