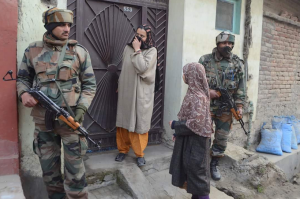 In the past few days, the Guardian-UK posted two photos from Kashmir: the first of a woman praying & the second of a man sitting on a log on a cold winter morning.

There have been many photos of Kashmiri protesters since media ended its complete news blackout about a year ago. But like coverage of the Palestinian struggle, media does not publish photos of massive protests & funeral cortege/protests numbering in the tens of thousands, even hundreds of thousands but instead publishes photos of young men protesters who appear to be alone or engaged in vandalism. There’s no subtlety here; the intent is to make Kashmiri resistance to occupation look like the work of nihilistic, antisocial trouble-makers.

The coverage has changed since the current military siege began on July 9th after the shooting of the young man whose name is taboo on FB. It’s back to tranquil scenes of Dal Lake, men walking in the woods or sitting on a log & lots of women praying. No images of the women when they join protests by mothers of the disappeared?

Once again, as it was before the media ended its complete news blackout, the primary source of news is Kashmiri activists on social media–& one is hesitant to say that lest India again enforce an internet ban in Kashmir. Since Indian soldiers threatened one of the photojournalists in Kashmir, vandalized his home, & terrorized his family, it is evident that censorship is involved in what gets published. Rather than western news media making a political stink about it to the Indian government, at the very least in defense of their reporters, they publish photos of men sitting on a log on a chilly day.

This photo is from the Twitter wall of Kashmiri leader Syed Ali Geelani who was permanently banned from FB in July for mentioning the name of the man whose name cannot be said.

These soldiers are on house to house searches claiming they’re hunting down terrorists in an area near Srinagar. Imagine going about every day life with one soldier toting assault rifles to every seven Kashmiris.

End the occupation! Self-determination for Kashmir!