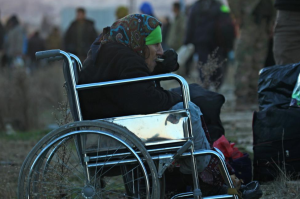 The Geneva Conventions have protocols to protect civilians in a war zone but are equivocal on the question of forcible evacuation. Of course even if they were crystal clear there isn’t a single country at war today that doesn’t flout & make a mockery of the Conventions.

Assad official Fares Shehabi & regime propagandist Vanessa Beeley traveling with the Syrian Army in Aleppo have shown photos & told stories of jubilant reunions between civilians in west Aleppo & those they claim were held hostage by “jihadists” in east Aleppo.

In fact, there doesn’t appear to be any free passage from east Aleppo to anywhere, especially west Aleppo. Leaving east Aleppo is an ordeal & a dangerous one at that. We don’t know the full scale of things but from photos posted on social media by Shehabi, hundreds of men & boys from east Aleppo have been arrested by the regime as terrorists.

Humanitarian agencies claim thousands of people, including women, children, the elderly & infirm remain “trapped” in east Aleppo in freezing temperatures. Civilians in east Aleppo are not just war-traumatized but have been without food & water or medical care for a long time so there is critical urgency. So why do they have to be relocated to receive aid when the health of so many is already massively compromised?

What are all those convoys of green buses provided by the Assad regime about except to evacuate civilians? Forcibly? Why can’t they stay put in east Aleppo which the regime claims is liberated? Why hasn’t the benevolent dictator Assad directed Syrian aid agencies to move in convoys of food supplies, clean water, heat, medical personnel? Isn’t Asma Assad renowned among Assadists for her charitable endeavors?

If we’re expected to believe that liberation scenario, perhaps Beeley can ask her handlers in the Assad regime why the evacuees are being relocated forcibly from one war zone in east Aleppo to other war zones near Idlib that are still sustaining airstrikes, including barrel & cluster bombs?

Since Beeley is traveling with the Syrian Army as it occupies east Aleppo, perhaps she could tell us what the army is doing there? Is there some reason that civilians should feel “trapped” or endangered in a liberated zone? Since Beeley’s companion Fares Shehabi, the Assad official for Aleppo, is publicly threatening revenge against those “jihadists,” does Beeley expect to see executions, shoot-outs, guerilla warfare? Will she document it for us? Or is she being paid enough to make it look like party-time in east Aleppo?

This is an elderly evacuee from east Aleppo eating upon her arrival in the town of al-Rashideen which is also a war zone.