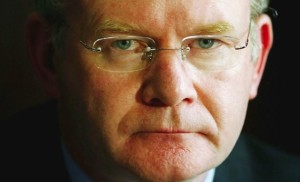 It’s so easy to have a go at Martin McGuinness for betraying the freedom struggle in Northern Ireland. He’s a man who moved from guerilla warfare to parliamentary bickering in what seemed a seamless transition. But it’s more worthy of pity than sarcasm to see a rebel reduced to groveling. There are so many–like Bobby Sands–who died for the same cause that McGuinness now honors with banalities like his “very nice & useful meeting” with Betty Windsor & ‘stretching out the hand of friendship’. And he couldn’t leave bad enough alone; he had to add “”she is someone who absolutely & passionately supports the peace process & supports big acts of reconciliation.” How do you stoop that low!?

“Remember,” he said after he got up from curtsying to Betty, dusted off his knees, & wiped the spittle off his chin, “I am an Irish republican. I was an Irish republican when I went in there & I am still a very proud Irish republican, but I also have a very important ministerial position. So it’s self-importance & a government post that reduce a man to such indignity & such betrayal!?

When St. Patrick chased the snakes from Ireland they came to the US & morphed into politicians & bishops. Apparently a few eluded his scepter & headed north for Belfast.

(Photo of the pitiable McGuinness by Google Images)