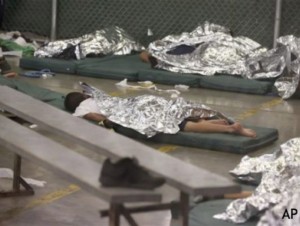 Neither the Obama regime nor Homeland Security will release the number of undocumented immigrants they’re releasing from incarceration but not deporting back to Honduras, El Salvador or Guatemala where most of them are from. The number is estimated now at over 40,000.

Here in the Rio Grande Valley they’re simply dropping busloads of immigrants at the bus station. Catholic Charities has organized a sanctuary facility at a church just blocks from the depot where they approach immigrants, most of them with nothing more than knapsacks, & invite them to sanctuary where they can get meals, showers, clothing, temporary shelter, & medical care if needed before they head north & hopefully to reunion with families.

Because Homeland Security isn’t talking, it’s uncertain if families are being separated. What is observable is that in the constant parade of immigrants through the sanctuary, all are young women with very young children, including infants. What is happening to the men?

Media is throwing out alarms that the immigrants are bringing in TB, scabies & lice, Dengue fever, measles, chickenpox, & even leprosy. Most of them just look exhausted. There is a social history of immigration here that hopefully will someday be told & answer how the hell they got nearly 2,000 miles with a knapsack & an armful of kids.

One of the ironies of the situation is that in sorting underwear into sizes for orderly dispersal, most of the tags read “Made in Honduras.”