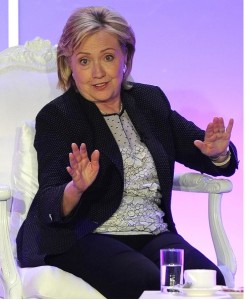 As part of her everlasting book tour, Hillary Clinton stopped in Los Angeles on June 19th to accept the William O. Douglas award from Public Counsel, a pro bono law firm. Sounds impressive until you know previous recipients were Bill Clinton & Madeleine Albright, who will forever be shamed & despised for her comment that the deaths of 500,000 Iraqi children were “worth it” to uncover Iraq’s non-existent WMDs. In other words, the award is trash.

In her acceptance speech Clinton reportedly claimed that as a young attorney she tried to “bring justice to remote corners of the globe such as the Democratic Republic of Congo.” Odd claim, since it doesn’t show up anywhere on her resume after her graduation from law school in 1973. What does show up is that since 1979, she was a partner in the Rose Law firm in Little Rock, Arkansas. Rose Law firm is described in Carl Bernstein’s biography of Clinton as the “ultimate establishment law firm” & a bastion of Arkansas political & economic influence. Tyson Foods & Walmart–two of the most disreputable corporations in the US–were among its clients. Clinton served not only as Walmart attorney but sat on its board as well as the boards of several other corporations. That’s more than enough damnation for one life.

It’s always a marvel when famous writers are nailed for plagiarism. The spontaneous question is: what the hell were they thinking!? It’s an even greater marvel when a candidate for one of the most visible (if not also the most odious) positions on the planet makes up a resume. Who the hell does she think she’s kidding?

One thing that does show up in Clinton’s resume is involvement with child advocacy. That would be an asset (though not a reason to vote for her) if she were not now calling for the deportation of undocumented children. You know there’s a crisis of leadership in this country when Hillary Clinton is the best the Democratic Party can do. She represents the best of that stinking morass.