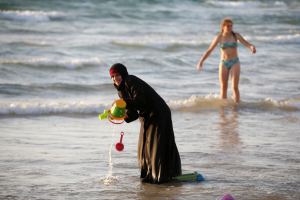 Let it never be said the Israeli propaganda machine is slow on the uptake. While there is little coverage of Israel’s violent land expropriations in the West Bank, razing whole villages, or bombing in Gaza, there are frequent photos of Israel trying to broker harmony with “Israeli Arabs” on camping trips & excursions for children.

A phony multiculturalism with Palestinian residents of Israel (who are massively discriminated against, as are African Israelis) is the latest thing in colonial image-making.

Here Reuters tells us “a Muslim woman wearing a hijab stands in the waters of the Mediterranean Sea as an Israeli stands nearby on the beach in Tel Aviv.” Israeli apartheid even has one up on France, the land of “liberté, egalité, fraternité. Not hard these days. And also my ass!

Answer this rubbish by building the economic, cultural, & academic boycott of Israel (BDS).