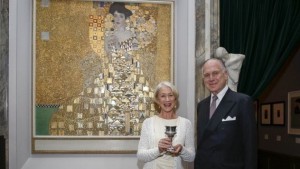 Helen Mirren loves Israel–despite apartheid, carpet bombing of Gaza, & extra judicial executions of protesters. Thus she detests BDS, the boycott of Israel. When interviewed before receiving her achievement award from the Israel Film Festival in Los Angeles on Wednesday, Mirren said she agreed with British Zionist figures, including JK Rowling, who signed an open letter last week opposing the cultural boycott of Israel & calling for cultural engagement “as a way to promote peace between Israel & the Palestinians.” Mirren said that quite earnestly whilst Israel is engaged in a violent pogrom against Palestinians.

Our medieval dame said: “The people who are the most inspiring in Israel tend to be from the cultural community. The writers, the directors, the poets, the musicians, they are truly extraordinary people doing amazing work, peace giving work, working towards peace all the time. To cut them off is the craziest idea, I don’t agree with it at all.”

Well then, at least she isn’t inspired by the Israeli army of occupation but only by those who write odes to them or don’t publicly oppose them. But one wonders what Mirren makes of Amnesty International’s condemnations of Israel for extrajudicial executions of Palestinian teens? Does that mean she will no longer campaign for Amnesty?

This photo of Mirren with Ronald S. Lauder, the head of the World Jewish Congress, at another occasion than the film festival, suggests our dame has strong, long associations with Zionism. So now we’ve got her number.