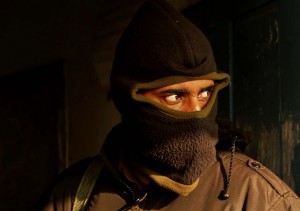 This is an Indian paramilitary soldier guarding a polling station during voting in Kashmir state elections. Political analysts have been writing a long time about militarization in schools, on national borders, of the police, even of outer space. For heaven’s sake, today SWAT teams are used not just to apprehend armed & dangerous criminals but to serve warrants on church ladies for unpaid parking tickets.

What also needs to be analyzed is militarization of the ballot box which has been going on a long time in a lot of countries. It’s common to see guys like this at election queues. What do they think is going to happen? Is someone going to try to run off with the ballot boxes or go hog-wild stuffing them if there aren’t armed guards hanging around?

There are plenty of ways to rig an election without holding a gun to people’s heads beginning with limiting who gets on the ballot (as we just saw in Hong Kong). The US election commission knows a thing or two about that. The Florida election commission & US Supreme Court wrote the book on that when they ignored massive voter fraud & threw the election to George Bush. Militarization of elections does not protect them from voter fraud. There were soldiers all over the place during the Egyptian election that put Mohamed Morsi in power but there were very credible complaints about widespread fraud.

Given the shabby state of electoral politics today one wonders why paramilitaries are necessary. It’s hard for people to understand in places like the US where the political choices are so deplorable you’d have to send SWAT teams door-to-door to rout people off their asses just to get the majority to vote. “Why bother?” makes perfect sense.

Popular suffrage is an achievement of the capitalist revolutions against feudalism but in truth, suffrage is not likely to play a central role in getting rid of capitalism because elections are so easily rigged. Under neoliberalism, elections are a shell game to siphon off energy from popular rebellion. During election years in the US, antiwar & other social protest go way down, almost to nothing. Al Sharpton & Jesse Jackson hot-footed it to Ferguson as proxies for Obama precisely to keep the movement within electoral limits. This time the movement is bigger & deeper than their machinations can control.

Of course what this militarization of the ballot box represents is conflict & imbalance in power. And that is sure as hell true in Kashmir under barbaric occupation by the Indian military. It certainly doesn’t mean the outcome of popular suffrage will serve justice in Kashmir which is why political dissidents are calling for a boycott of the elections. One cannot be dismissive of voting even in US elections when so many Blacks & Latinos are gerrymandered & maneuvered out of voting rights. But one doesn’t have to be a fool about them either. Sometimes the only time you throw your vote away is when you actually cast it. And sometimes, like in Kashmir, casting a vote will defy justice.