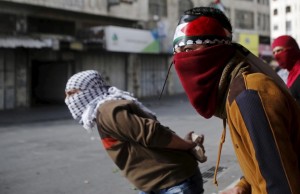 Media continues to peddle the rubbish of a stabbing rampage by Palestinians–of course to cover for Israel’s pogrom against Palestinians. What they don’t report about is Israel’s illegal occupation of East Jerusalem & the West Bank or the continuing bombing & murderous blockade of Gaza that the UN says will make Gaza uninhabitable by 2020.

Why don’t they explain that the confrontations take place between Israeli soldiers & unarmed Palestinians when Israel attempts to suppress Palestinian protests against the occupation & expropriation of lands? Or in this instance, protesting for the return of Palestinians shot dead by Israel so their loved ones can be buried with respect & honor?

Once again, it is outrageous & idiotic to claim Palestinians armed with knives are a widespread danger. It would only be credible if Israeli soldiers & settlers were planting bazookas or semi-automatic weapons on Palestinians they execute, rather than shivs. But to be clear, if Palestinians were using knives to defend themselves, that is their right against an illegal & brutal military occupation that kidnaps & assaults their children, arrests hundreds for no reason or for tossing a rock, allows settlers to torch homes & mosques, & dispossesses entire villages to make room for settlers & phony religious shrines.