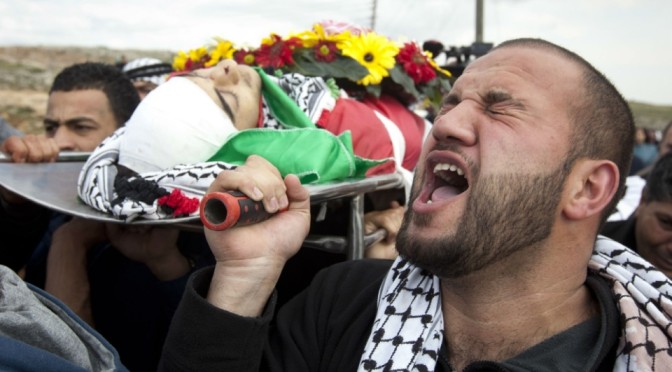 There were six funerals this week for three Palestinians killed by the Israeli military in the West Bank (in separate incidents) & three killed by an Israeli bombing in Gaza. Thousands attended the funeral of this 20-year-old student named Saji Darwish who was shot in the head by Israeli soldiers (on March 10th) near the West Bank city of Ramallah.

A spokesperson for the Palestinian Authority (PA)–engaged in US-brokered peace talks with Israel since August 2013–issued a statement warning that Israeli violence could “lead to the situation spiraling out of control” & constitute “a dangerous provocation that will torpedo what’s left of the peace process.”

The constant violence against Palestinians by the Israeli military in Gaza & the West Bank & the acceleration of Zionist settlements in the West Bank do more than constitute a “dangerous provocation”; they expose the peace negotiations as nothing more than a diplomatic sham–& a shameful one at that–& expose the PA for what it was set up to be by the Oslo Accords: a phony regime with little authority except to help Israel control Palestinian intifada.

Adding humiliation to ignominy, the PA statement went on to urge the US, UN, EU, & Russia to intervene in the situation. They aren’t involved enough with their bankrolling of Israel’s massive arsenals!?