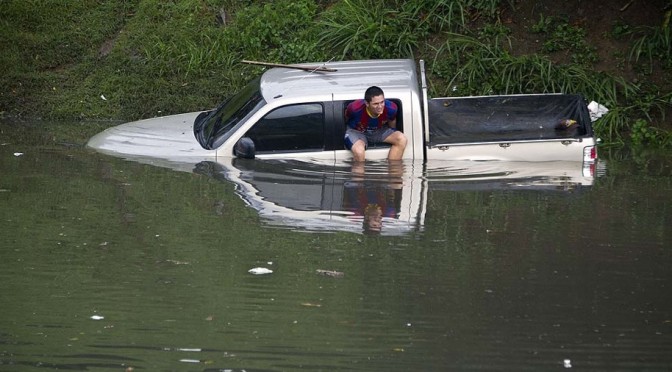 Stranded by flooding in Cali, Colombia: undoubtedly what most concerns Colombian & US officials is how the massive flooding will affect drug production & trafficking this year. The CIA & Colombian businessmen rely on that filthy luchre for personal enrichment & to bankroll their nefarious operations. That’s not conspiracy theory but is very well-documented.

The reason for flooding in Colombia should come as no surprise since for decades Colombian rainforest has been stripped bare for cocaine, marijuana, & heroin production & deforestation is now accelerating for gold mining & to build palm oil, sugar cane, & biofuel plantations.

Deforestation disrupts the water cycle which trees play a vital role in maintaining. Trees draw water up through their roots to release into the atmosphere. A large part of the water that circulates within a rainforest ecosystem remains inside plants & trees. Trees also affect rainwater runoff & help soil absorb the excess water. So when forests are mowed down the climate gets drier, exposes soil to additional sun-baking, & eventually makes soil infertile by washing away vital nutrients in unimpeded rainwater. This process also leads to riverbank erosion which affects the levels of river beds.

It’s a slippery slope those drug peddlers & neoliberal predators are traveling since they’re pushing against the very laws of nature. At a certain point, even the most advanced Monsanto chemicals won’t be able to solve the problems of agribusiness created by their greed.

It’s long-since time we took back our planet from those so blinded by greed they are unable to steward the bounteous resources of Mother Earth meant for all of us to enjoy. And we ought to do it before there isn’t a patch of grass left to sit on or an acre left to plant food.