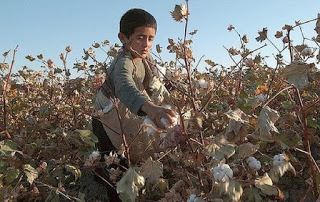 This is an article I wrote on child labor for Wisdom Blow ezine in January 2012. Child labor increases exponentially as capitalism continues its decline into barbarism. The manicured patricians who run multinational corporations exploiting children as miners, garment workers, farm workers, sex slaves have no scruples because racism is a fundamental component of child labor driven by the economic compulsion to drive down the power of adult labor. Child labor is an intolerable scourge for humanity & must be actively opposed.

There are many wrenching images of child laborers from around the world but this photo is of a child farm worker in the US. The US & European regimes flaunt superiority with their child labor laws, ignoring that most countries have legislation prohibiting or restricting it. Of course, nowhere are these laws allowed to impede profiteering, especially by US & European mining & agribusiness multinationals.

Child labor exists in every country, even if only in illegal sweatshops with trafficked labor, but also in legalized (though still barbaric) forms. In 2012, the Obama regime, in service to agribusiness, defeated safety legislation for child farm workers & made it illegal to ever again attempt to even monitor child labor practices on farms. This excludes from protection an estimated 800,000 (mostly Mexican) children working with pesticides, dangerous tools, in extremely dangerous conditions, & with livestock. A little investigation would likely turn up similar escape clauses in European countries.

The fundamental purpose of employing children is to eviscerate the economic & political power of adult labor & reduce working people to the status of chattel. Many argue child labor cannot be outlawed because it is necessary to family survival. Such hooey is based on a narrow understanding of the problem & the solutions. What about the survival of the children?

This post is a tribute to child workers & a pledge to do our utmost to advocate for them to get them back to the schools & playgrounds where they belong.

(Photo of child farm worker in US by unidentified photographer)