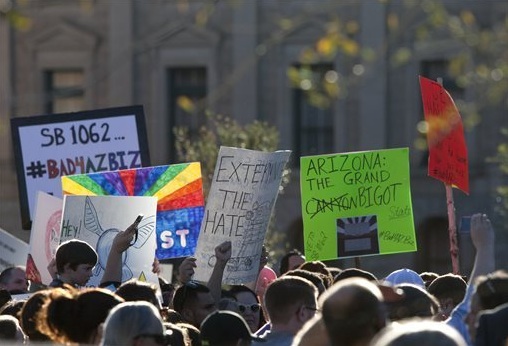 Arizona is becoming ground zero for a battle to defend the US Bill of Rights–probably the only salvageable part of the US Constitution other than it’s preamble. Its politicians are among the creepiest & most repugnant in US politics–like senator John McCain & governor Jan Brewer. That judgement could be an overstatement; it may only be that Arizona politicians are just grandstanders whereas reactionary politicians in other states do their nefarious work in the shadows where they think they won’t be caught. Showcasing Arizona may be part of a right-wing strategy to destroy the Bill of Rights.

Bankrolled & advised by the Center for Arizona Policy (CAP), a state senator named Steve Yarbrough (R) introduced SB 1062, anti-gay legislation which would violate several provisions in the Bill of Rights under the guise of religious freedom. The bill was just passed by the state legislature & governor Brewer has until Friday, the 28th, to sign it into law. She’s pulling the Yoweri Museveni (president of Uganda) stunt of pretending to ponder the issue before she brings down the weight of law against LGBTI people.

CAP is a shadowy right-wing group that won’t identify it’s board of directors but is guided by Charles Krauthammer, a media commentator whose canon of beliefs is as odious & reactionary as they come. His persona is so elitist, snide, & condescending one can see him filling any position in a fascist regime that doesn’t require competency.

SB 1062 would allow a “person” defined as “any individual, association, partnership, corporation, church, religious assembly or institution or other business organization” to refuse to hire or deny services to LGBTI people on the basis of sincerely held religious beliefs & social hatred. We’re not talking a slippery slope here for the Bill of Rights; we’re talking a 600 foot cliff under the malignant guise of espousing religious freedom–it might be added, a religious freedom many reactionary politicians & racist schnooks like Krauthammer are attempting to deny Muslims.

The intentional vagueness of SB 1062 allows for active discrimination not only against LGBTI people but against unmarried women, Jews, Muslims, & others. And if your religious doctrine sincerely hates Mexicans & Blacks, can you deny them services too? That’s not a slippery slope for democratic rights. It’s a collision course with catastrophe.

There’s no report of objections to SB 1062 from Obama; McCain is too busy addressing & inciting fascists in Ukraine to do more than tweet “his hopes” that Brewer would veto the bill. Once again, there’s nothing like a good tweet to bring injustice to its knees.

(Photo of activists against SB 1062 rallying at state capitol in Phoenix, AZ on Feb 21st to demand Brewer veto bill; by AP)