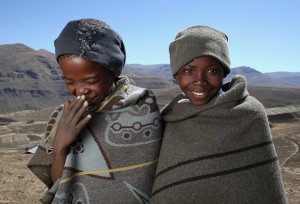 Media reports a military coup in Lesotho, Africa that has sent the prime minister into exile in South Africa. Apparently Letsie Seeiso, the “king”, can sit tight because similar to Betty Windsor, his duties are ceremonial while he feeds at the public trough. As usual, no media source has found it necessary to explain the politics behind this coup but there are plenty of issues facing the working people of Lesotho that warrant popular rebellion. This is a slightly edited version of a post from October 2013 describing a little of the integration of Lesotho’s economy into neoliberalism, the barbaric phase of capitalism:
——————-

This photo seems to capture an endearing shyness in these young herd boys from Lesotho, Africa. The caption says they’re going to the opening ceremony of the Mateanong Herd Boy School built by the charity Sentebale in the village of Mokhotlong. You want to believe this photo is about the bucolic rather than the barbarous but you have to ask what this herd boy school is all about–especially since Sentebale was founded in 2006 by Harry Windsor from the British moochocracy & Seeiso, the brother of Lesotho’s “king”.

Lesotho is a mountainous kingdom of just over two million completely surrounded by South Africa. Its economy is based on agriculture, livestock, sweatshop manufacturing for the US garment market, diamond mining, & remittances from workers who work in South African mining. Nearly 50% of the population live below the USD $38.00 a month established by the World Bank as the international poverty level (based on the 9,000 B.C.E. economy).

Lesotho has the third highest HIV rate in the world (23% of the population), partly explaining its orphan population of over 350,000 children. But HIV is not the only health issue. Child & infant mortality is high (hospitals are reported to have roach-infested maternity wards) & life expectancy for both men & women is only 42 years. That may be because there are only five doctors per 100,000 people. The Gates Foundation is involved in health care primarily around the issue of HIV & has been sharply criticized for devastating health care by diverting staff from basic care & focusing on vaccinations rather than providing essential healthcare & food to a malnourished population. Many HIV patients reportedly have so little food they vomit their free pills.

Child labor is widespread, including an estimated 35,000 boys who work as shepherds in the mountains. Little boys, some as young as 5-years-old, leave their families for months & sometimes years at a time to herd cattle & sheep. In freezing temperatures they have to fend off feral dogs, snakes, & other predators, including armed livestock rustlers; they are deprived of all education; they are forced to endure long periods of complete isolation. Their pay for one years work is one cow or several smaller livestock like sheep.

It is reported the herd boys often become hostile & antisocial & are known for their shyness since they have no idea how to live within a community. One UNICEF worker said, “I’ve worked with child soldiers & seen the look in their eyes, but it’s not as lonely as the look in a herd boy’s eyes because at least child soldiers run in groups.”

The Lesotho government & Sentebale have established a few herd boy night schools to teach reading, writing, & basic arithmetic but to attend the boys often must walk 15 to 20 miles round-trip on unlit mountain paths from the cattle post to the school. This charitable largesse is likely more about public relations for Harry Windsor than beneficial to the young herd boys.