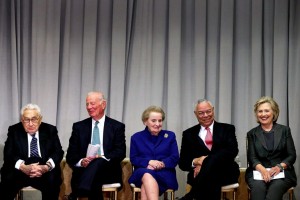 You can be forgiven for thinking this the receiving line at the Vampires Ball. There’s more corruption in this photo than even Beelzebub can fathom. Hell hath no pit hole deep enough to contain their stinking corpses. Ugly isn’t a necessary part of aging but when your life mission is shilling US militarism, nature does not play kind with you. It’s a variation on the theme of Oscar Wilde’s “Portrait of Dorian Gray.”

These troll-like creatures are former US Secretaries of State Kissinger, Baker, Albright, Powell, & Clinton at the ceremonial groundbreaking of the US Diplomacy Center in Washington DC. When finished the center will be a museum & education center–which in DC-speak means a place where they clean up historical reality & peddle barbarism as heroic.

We wish they had all chosen to “go quietly into that dark night” but they still all earn big bucks on the corporate speaking circuit & in teaching, advising, & business. Kissinger has a book due out this month on the ‘new world order”. The trailer for the book floated in several media outlets makes it look as lyrical as insurance actuary tables. So much for his vaunted genius which has only ever been manifest in barbarity.

Clinton of course, is running for POTUS but even her own party thinks she may be too corrupt & are priming Elizabeth Warren to challenge her with Clinton representing the extreme right-wing of the Democrats (DP) & Warren the moderates. There is no left-wing in the DP & never has been. That’s an illusion fostered to rake in union campaign dough & the support of corrupt Black, Latino, & feminist leaders. It takes so little illusion to deceive & that is the folly of US politics.