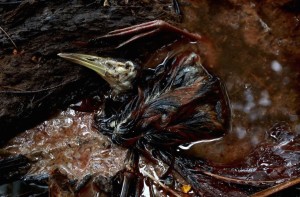 In the past two weeks, there have been two catastrophic oil spills in Mexico–one in the state of Veracruz on the Gulf of Mexico & one in the northern state of Nuevo Leon not far from the Mexican border with Texas. Oil spills are constant in Mexico which Mexican officials always attribute to oil thieves tapping into pipelines; a variation on that theme is drug cartels diversifying business & pirating oil from illegal taps. That story only flies because being a reporter in Mexico is a dangerous profession so no thorough investigations can be done without getting in harm’s way. But even on the surface, the story stinks to high heaven.

The oil industry in Mexico was nationalized in 1938 when the Mexican government booted predatory oil companies from the UK & US & took over the industry. The government-owned oil company is called PEMEX. Despite corruption originating in the government & not nationalization, PEMEX provided affordable energy for Mexican working people. The corruption entailed theft by officials in place of investing profits to maintain the infrastructure & develop energy technology. But being an outdated system isn’t why it’s susceptible to illegal tapping.

The technology of even old pipelines means it’s unlikely the thousands of illegal siphons are by fellows from the nearby town driving up with barrels in the back of a pickup to fill & resell on street corners, as media & oil industry publications claim. Pipelines shipping volatile & flammable oil & gas are under extreme pressure monitored by PEMEX; a leak along the line can be detected within minutes & maintenance crews dispatched for repair. The pressure & volatility make it prone to fires & explosions & extremely dangerous for untrained petty thieves who try to tap a line. Even the drug cartels would have to hire specially trained mechanics to siphon without blowing themselves up. Yet there are over a thousand illegal taps reported every year in Mexico.

The story might not be of as much interest were it not that oil piracy is a major issue in other oil-producing countries, most notably Nigeria–& the story coming out of Nigeria bears a striking resemblance to that in Mexico: Nigerian pirates, militant groups, & criminal gangs are killing their own economy, sabotaging their government, threatening the very foundations of Nigeria’s petroleum industry by illegal siphons. But after 58 years of oil exploration in Nigeria, the government neither meters nor monitors the volume of oil production by Shell & other oil companies, has no functioning regulatory agencies, & doesn’t have a clue what is produced & loaded on to tankers. After bribing corrupt government officials, foreign oil companies simply loot thousands of barrels. A US diplomatic cable released by WikiLeaks exposed the collaboration between Nigerian politicians & military officials. They’re the ones responsible for the majority of oil thefts, not militants or small time operators, because they can commandeer & control access to barges & tankers to help oil companies loot thousands of barrels a day.

Speculation you say to assume the same might be happening in Mexico? There was already a court case brought by PEMEX in a US court in 2011 where the head of a Texas refinery was convicted of selling stolen Mexican fuel & another case accuses 12 US oil & gas companies of dealing in stolen fuel. Shell & ConocoPhillips are both accused of handling the contraband. Most of these oil companies are headquartered in Texas.

There is indeed massive fuel theft in Mexico facilitated by the present government which opened PEMEX to neoliberal privatization in December 2013. The Mexican government did not invest PEMEX profits in development & instead for years relied on subcontracting to firms like Halliburton & other oil service companies. Halliburton (which earned ignominy in Iraq) & one of the other companies provided technology to the Deepwater Horizon rig which caused the 2010 BP oil spill in the Gulf of Mexico. Last year Halliburton pleaded guilty to destroying evidence needed by BP in litigation over that spill.

So when millions of gallons of PEMEX oil & gas are being siphoned, the likelihood is these operators are involved up to their eyeballs because they have the resources to bribe officials to look the other way when they drive tankers up to siphon & to clear customs when they drive them across the US border. It is probably not at all coincidental the oil spills in Mexico are exactly where Halliburton & other companies have set up operations & facilities. If the Mexican government really wanted to stop illegal tapping, it could send some of the 45,000 soldiers now deployed ostensibly & so ineffectively against drug trafficking to guard the pipelines.

The spill on Rio Hondo in Veracruz is in the Gulf of Mexico aquifir system previously hit by oil spills & contaminates the water supply for millions of people. The mid-August oil spill in Nueveo Leon is on the Rio San Juan which supplies water to the city of Monterey & is a tributary to the Rio Grande (Rio Bravo in Mexico) on the US-Mexican border–which is the fourth largest river basin in North America. PEMEX claims 90% of the oil spill in Rio San Juan is cleaned up. Meanwhile residents are on an emergency drive to provide clean water because they know full well it will be years, if it is ever cleaned up.

Multinational oil companies view Mexico as a Wild West for profiteering & promise billions to develop the industry. They’ve already laid out entire maps for fracking Mexico. If we want to see what kind of development they plan for Mexico we only need look at the Niger Delta. That environmental catastrophe awaits Mexico.

Photo is a dead bird floating in the Rio Hondo in Veracruz after the gas pipeline spill on August 27th.