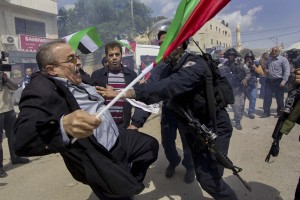 Yesterday was Land Day for Palestinians, a commemoration which began in 1976 among Palestinians in Israel against land expropriations to build settlements & military installations. In 1976, six unarmed Palestinians were killed while protesting the annexation of their homes, over 100 were injured & hundreds were arrested when Israel sent army & police after them. It’s now a political event commemorated by Palestinians & their supporters around the world.

This Palestinian man being assaulted by an Israeli border policeman is at a Land Day commemoration near Nablus in the West Bank. He’s not an old man but he’s not a kid either & could be seriously injured by such an attack. Of course, age has never been an impediment to Israeli security forces who manhandle & arrest children as easily as they do seniors & according to human rights groups, torture them in prison.

Build the hell out of the economic & cultural boycott of Israel & demand not a penny of aid of any kind to Israeli apartheid, ethnic cleansing, & land expropriations.