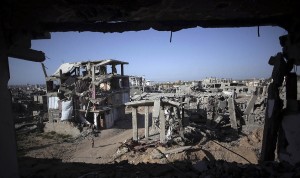 CBS is showcasing “The Dovekeepers,” a four-hour miniseries based on Alice Hoffman’s novel dramatizing the story of Masada, an ancient “Israeli mountaintop fortress” where a pseudo-historical battle took place in 73 CE between Israelites & Roman soldiers ending in a mass suicide. The miniseries is of the 1960s Biblical epic genre, full of melodrama & tedium not relieved by a few even more tedious make-out scenes. It’s a wreck of a thing & completely out of fashion cinematically.

Cote de Pablo plays one of the central women figures. Is it conspiratorial to suggest that her role as a Mossad agent in NCIS helps explain why she was chosen & the possible motivation behind this dreadfully dull miniseries? It’s really an elaboration of the Exodus myth giving Zionists claim to Palestine.

This isn’t the first time the likely fictitious siege of Masada featured in a TV miniseries. In 1981, Peter O’Toole headed the cast. It’s as memorable as this unfortunate work because propaganda always rings false in some way.

The historicity of the siege of Masada is challenged by Israeli archaeologists, anthropologists, & forensics experts. Many scholars argue there is less scientific rigor involved in excavations of the site than attempts to enshrine Masada as part of Zionist origin mythology–the same way they do with Al-Aqsa Mosque in Jerusalem & the Cave of the Patriarchs in Hebron in the West Bank.

The Masada mythology of Israelite freedom fighters choosing suicide over slavery in their conflict with the Roman Empire became a symbol in forging the State of Israel & for a long time served as a centerpiece of Israeli national identity. At one time, the Israeli military actually held induction rituals at Masada. The place is still a tourist attraction but mass suicide has fallen out of favor as a symbol only to be replaced with ethnic cleansing of Palestinians.

This is a photo of Gaza City today. The media caption says displaced residents have begun to return to their “war-damaged” homes. The romanticized siege of Masada confronts the barbarisms of Operation Ethnic Cleansing in Gaza. When you build a nation on lies, paramilitary violence, massacres, terrorism, carpet bombing, this dystopia is where it leads.

Enough with the fairy-tales. Build the economic & cultural boycott of Israel.