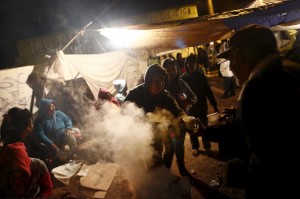 The US labor movement is so compromised & wedded to the Democratic Party that strikes are often ritualized, inanimate things–as boring to participate in as to witness. There are exceptions but they are rare. Not so the current farm workers strike in Baja California, Mexico (south of San Diego). Mexico was the first country where neoliberal agribusiness (called the “green revolution”) was instituted, accompanied by extreme political repression to crush dissenting farmers & farm workers who were dispossessed & often forced to move to the US as undocumented workers. So this strike in Baja is of the greatest consequence.

Last week, the agribusiness bloc offered a six-percent wage increase on a paltry US $8 to $10 a week wage. The farm workers blew a cherry at that insult. Since millions of produce is rotting in the fields (estimated at a $80 million to $100 million loss), agribusiness offered a 15-percent raise yesterday. Chump change again amounting to about $1.40 when strawberries laden with pesticides sell for $4 to $5 a pint in supermarkets just across the US border.

It’s very hard for workers earning so little to sustain a long strike, especially since many are migrant workers (including children) from more southern Mexican states, so agribusiness is gloating that many have returned to the fields. That’s unfortunate since it will make activists & strike leaders easier to victimize after the strike is ended. But that doesn’t mean agribusiness has seen the last of farm worker opposition.

Our inability to render them active solidarity speaks loudly to the need to transform the US labor movement from a boot-licking operation into a fighting organization. For heavens sakes, they couldn’t even get off their asses to oppose the Obama regime in 2012 when it legitimized child labor among farm workers in the US.
This photo is of strikers in Baja California waiting for news about the negotiations. Our fullest solidarity at least in sentiment & our commitment to transform US unions.