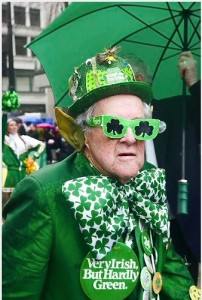 Irish Central is the online media voice of Lace-Curtain Irish in the US. Lace-Curtain Irish are those of Irish ancestry (& just as often those morphed from the snakes St. Patrick banished from Ireland) who because of acquired wealth (often through theft & crime) & insufferable pretensions grovel their way into WASP circles. The editors claim their purpose is to help Americans of Irish ancestry reconnect with their “Irishness,” with their their “special & wondrous heritage.” Is it more wondrous than being Lithuanian? More special than Italianness? Do they mean historic “Irishness” or the mythological one? Or is it more mystical than that? Or is it just a preference (or at least not a repugnance) for green beer?

Just to show how low they go to get accepted into WASP circles, their editor Niall O’Dowd accused NYC mayor de Blasio of demonizing the NYPD in the wake of the Eric Garner verdict. O’Dowd wants de Blasio to go after the protesters & he singles out Al Sharpton. If he finds Sharpton offensive imagine his views of the rest of the protesters! Our man O’Dowd only understands groveling; rebellion is no part of his nature.

Now our man has published a list of some of the most hated figures in Irish history–& a despicable lot they are: Oliver Cromwell, who used Ireland as a killing field; those English officials who administered “The Great Hunger” (more properly called a genocide); Winston Churchill, who deployed the Black & Tans to Ireland; Colonel Derek Wilford, known as “the Butcher of the Bogside” for ordering British troops to fire on unarmed protesters in Derry on “Bloody Sunday” (1972); & Margaret Thatcher, who allowed ten IRA prisoners on hunger strike to starve to death (may the Iron Lady “Rust In Peace”).

What, no Bono? And we’ll leave our damnation at that.
Photo is image of American connecting with his “Irishness.”