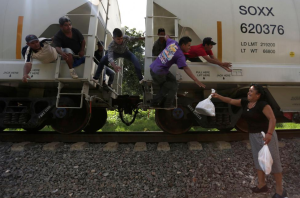 This train is called “La Bestia” (The beast) or “El tren de la muerte” (The death train) by undocumented immigrants from Central America. The name refers to a network of Mexican freight trains that begin in the southern states of Chiapas & Tabasco & travel 1,200 miles to the state of Tamaulipas on the US Texas border.

Though an estimated 500,000 immigrants, driven by dire circumstances at home, travel these trains every year, they are an extremely & notoriously dangerous way to travel. They do not stop to allow people to hop on or off so hundreds have lost limbs & must return to countries with no social security for disability.

Criminal gangs & paramilitary operatives working with the Mexican army prey on the immigrants, subjecting them to rape, robbery, extortion, murder, kidnapping, disappearance, mass executions & mass graves. In 2014, the eastern state of Veracruz on the Gulf of Mexico filed a lawsuit accusing the railroad of complicity in the violence on trains.

The Mexican government functions as the southern phalanx of US immigration policy. But in 2011, then president Felipe Calderon (responsible for the deaths of thousands of Mexicans & immigrants) signed a bill decriminalizing undocumented immigrants entering through the southern border. Previously, federal police would stop buses & search vehicles traveling north to remove immigrants & deport them. The primary way of traveling was & still is to pay a smuggler or to ride atop the freight trains.

In 2014, Mexican officials began cracking down on freight train stowaways. Those who were stranded, even in the most southern states, then began attempting the transit through Mexico on foot–subjecting them to extreme danger from criminal gangs & the military. Apparently the crackdown was ineffectual, even with using violence to enforce it.

All along the train route, Mexican immigration & human rights groups as well as hundreds of Mexican citizens have set up sanctuaries, medical care, provided food, water, clothing, & support to the immigrants. One of the most well-known places where that manifests is at Veracruz, a transit point north. The train doesn’t stop but human rights activists & local families rush to the passing trains to pass food & water to the immigrants. It speaks not just to the power of human kindness but to political solidarity with the right to immigrate to find work & build a better life.

This photo is from yesterday at Veracruz.