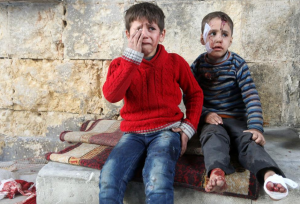 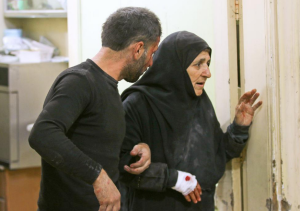 The Russian defense ministry announced a major missile & bombing assault on Syria launched from the Kuznetsov aircraft carrier off the coast of Syria. The ministry denies it is bombing Aleppo & Assad supporters confirm this based on reports in Russian government media. Though other Assad supporters laud bombing Aleppo as “liberation” from those “jihadists.” It must be evil fairies from outer space dropping bombs from jets & barrel bombs from helicopters.

Evil fairies—probably the same ones that bombed Gaza in 2014 when Israel denied bombing—would explain why the high-tech missile guidance systems couldn’t distinguish these civilians from “throat-cutting jihadists.”

Let’s cut the crap here: the only principled demands of antiwar activists must be: the immediate cessation of Syrian & Russian bombing of civilians & the immediate, unconditional withdrawal of all foreign military operations, whether by land, air, or sea, over & covert, from Syria.
(Photos by Abdairhman Ismail/Reuters)