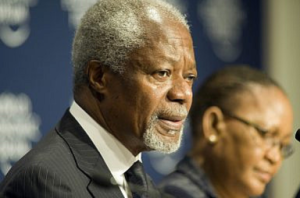 Kofi Annan, former UN Secretary-General, arrived in Myanmar yesterday as head of the 9-member commission appointed by Aung San Suu Kyi last August. Media reports said he was going to visit Arakan state “to probe reports of abuse against the Rohingya Muslims” but that’s not what he said & not what he’s going to do. He said on his FB wall that he is going to visit with community leaders in the state “to better understand the challenges they face.”

Media have just got this Annan commission thing all wrong. They continue–as late as yesterday–to report that Suu Kyi appointed the advisory commission “to propose solutions to the sectarian conflict between the Buddhist majority & Rohingya.” That is not what Annan told reporters after his first & until yesterday only one-day visit to Arakan state in September. At a press conference following that visit, he told reporters, “We are not here to do a human rights investigation or to write a human rights report.” As a diplomat, he’s used to talking out of both sides of his ass, but how clear can you get?

Annan told reporters that the commission will write an “impartial report” with recommendations “to reduce tension & support development” in Arakan state. How can even a whitewash commission do that when Myanmar & Suu Kyi stand accused before the world of genocide, including by the head of the UN refugee agency (UNHCR) at the Bangladesh-Myanmar border? When there are satellite images of entire Rohingya villages torched by the Burmese military & credible reports of mass rape, torture, arrests, injuries, executions, & when over 40,000 Rohingya have fled for their lives to Bangladesh? How does one remain “impartial” in the face of genocide?

After his first whirlwind visit in September, a reporter asked Annan, “Did any of you witness anything you would describe as oppression?” Annan answered, “Personally, I did not see it there.” There were then an estimated 150,000 Rohingya in Arakan state living in 67 concentration camps since the 2012 genocidal assault by the military. If our man Annan didn’t see those camps or ask to interview residents, it’s because he’s commissioned–& likely with a hefty remuneration–to play the dunce, to see no evil, hear no evil, cover for the Suu Kyi & junta genocide.

This time, arriving after two months of genocide, it will be difficult to pretend he doesn’t see those torched villages or the thousands gathered at the border with Bangladesh trying to flee. We await with anticipation to see how this “impartial” witness to genocide will play it. Expect the worst from a man who sold his soul a long time ago.