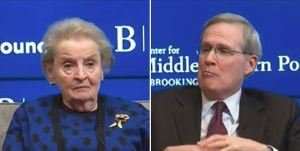 This is the notorious international serial killer Madeleine Albright & Stephen Hadley, a former National Security Advisor for George Bush who was considered as Trump’s Secretary of Defense. It’s even worse than seeing dead people.

In June 2015, the Atlantic Council, an establishment think tank, commissioned a bipartisan task force headed by these two corpses to formulate a strategy for Syria & the Middle East. Disputes over Syrian policy have been evident for a while, at the highest levels of government. It’s a complicated war because of all the opposing military forces involved–Russia, Iran, Hezbollah, militias from abroad, al-Qaeda, & ISIS. The US is not calling all the shots & those who formulate policy disagree on how the US can triumph politically & militarily.

The bipartisan task force was intended to broker the differences rather than have them erupt publicly. Its job is to make it appear the US knows what it is doing in Syria, without eliminating the widespread confusion about what it is up to & hopefully reduce opportunities for popular opposition to US intervention.

Albright & Hadley released the task force report yesterday & are already out peddling its proposals. The report is politically important & contains useful information but it is written by policy makers accustomed to dissembling, outright lying, & withholding information about US military policy. It is far from a full disclosure document to be read as scripture.

Media reports say it calls for military action against Syrian targets but it is actually equivocal. It doesn’t call for direct US military action against Syrian aircraft, air fields, & weapons stores because Russia’s presence precludes that. But it suggests the US employ airpower, standoff weapons, & covert measures to support “opposition forces” armed & trained by the US to threaten Syrian targets.

The report clearly says that regime-change in Syria is not an immediate option because of Russia, but remains a longterm objective. The evident expectation is that the conflict will be prolonged, so longterm becomes years & possibly decades.

It’s curious that some analysts call the report a rebuke of Obama’s “limited military strategy” because for the past six years of US intervention in Syria, most have been unable to elaborate that strategy. Obama’s secretive policies mean that most analysis remains speculative – based on infrequent leaks, complaints by the Russian defense ministry, statements by officials in other governments, reckless comments by former US officials, & rarely statements by US officials. The less known, the less popular opposition.

People are confused about the US role in Syria because it is a secret covert war coordinated by the CIA & special forces in collaboration with Saudi Arabia & other regimes. Obama gave a secret order to the CIA in 2013 to arm Syrian militias which wasn’t reported in the media (the NY Times) until January 2016–long after it was common knowledge. The report said Saudi Arabia bankrolls weaponry (supplied by the US & UK) & the CIA trains, organizes, & supports the militias. How big are these joint operations? What kind of weapons are supplied? Who are these militias getting trained? Syrians opposed to Assad, right-wing extremists, mercenaries, or foreign nationals?

How does the US “support” these militias? Do they coordinate with US special forces & mercenaries? Does the US provide them with air cover? And again, what operations are they involved in? Who are they fighting once they’re trained & equipped? Assadists claim they’re holding civilians hostage in cities, like in east Aleppo. The US claims they’re fighting Daesh/ISIS, but where?

Obama has repeatedly told us there are no US ‘boots on the ground’ in Syria. It’s nearly impossible to tell how many, but we know from media reports that hundreds of special forces have been deployed. That doesn’t include thousands of CIA operatives & mercenaries. What the hell are they doing? They certainly are not trying to remove Assad, so what are they up to?

Due to restrictions on journalists entering Syria (except for Assad propagandists like Eva Bartlett & Vanessa Beeley) reliable investigative reporting is rare. What we know most reliably comes from activists & networks within Syria & from exiled Syrians.

The details will not be made more public. This is a secret war in order to confuse & divide antiwar forces & minimize international opposition. It’s gonna stay that way.

What is clear is that the US intends to expand military operations in Syria & is in the Middle East for the long haul. It’s a hell of a time for the international antiwar movement to fall apart.