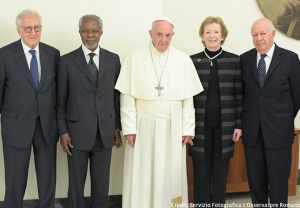 The Elders, a group initiated by Nelson Mandela in 2007, are an active group of globetrotters who show up in trouble spots all over the world. But age has not brought them political wisdom & they remain stuck in the UN-super powers approach to conflict resolution which often puts them at odds with justice for the oppressed. Their failings are most apparent in regard to the Palestinian struggle against Israeli apartheid & ethnic cleansing where they promote the two-state bantustate solution for Palestinians & actively oppose BDS. A bantustate solution is not just compromised politics; it’s LaLaLand stuff.

Kofi Annan was operating on his own, not representing The Elders when he was hired by Suu Kyi in August 2016 to head a commission to come up with ‘reconciliation & development’ proposals for Rakhine/Arakan state. Media reported it as an independent human rights investigation into persecution of the Rohingya but they weren’t really hearing Annan who talked in ambiguities to confuse them. He told a Yangon press conference, “We are not here to do a human rights investigation or to write a human rights report” but to make recommendations “toreduce tension & support development” in Arakan state–whatever the hell that means.

Annan told reporters that during the couple days he spent in Arakan he personally did not witness persecution of Rohingya–even though he was brought to one of the 36 Rohingya concentration camps. He cancelled a visit in October 2016 after the genocidal offensive began against the Rohingya that sent up to 100,000 fleeing for their lives to Bangladesh. If he had gone to Arakan, he would have seen the military occupation. He would have seen whole villages torched & heard reports from Rohingya residents of extrajudicial killings, arbitrary arrests, forcible disappearances, mass rape by soldiers & nationalist death squads. But our man Annan didn’t want to see that because he was commissioned by Suu Kyi & the generals to produce a whitewash of genocide.

Annan’s 63-page report came out almost on the eve of the August 25th genocidal offensive & has now been rendered useless even as a whitewash. What’s most despicable about the report is that Annan obliged the racism, social hatred, & genocidal impulses of Suu Kyi & the generals by refusing to use the name Rohingya & referring to them as “Muslims in Rakhine state”–not just denying genocide but stripping them of every vestige of dignity.

So what was Annan’s mission at the Vatican on the eve of Pope Francis’ visit to Burma on November 27th? Following the lead of the Burmese generals, Suu Kyi, Catholic Cardinal Charles Maung Bo & the bishops of Burma, The Elder delegation urged the pope to refrain from using the name Rohingya because it is “incendiary” & “so emotional.” How low can you go after genocide has sent close to one million Rohingya fleeing from mass rape, executions including the beheading & burning of infants & children, & the torching of hundreds of villages?

These are dignitaries so we’re supposed to show a little deference. What they deserve is scorn, contempt, & possibly prosecution for obstruction of justice. One hopes Pope Francis will rise above such cesspool politics to stand forthright with justice & the Rohingya people.