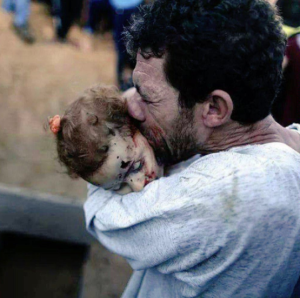 Palestinian children & youth are under siege in the West Bank with hundreds being manhandled & arrested by Israeli occupying troops. In Palestine, as in the Kashmiri occupation, as in the Rohingya genocide, children are not accidentally harmed in action against adults but are directly targeted in the most unspeakable ways, including beating, shooting, disabling, disfiguring, beheading, burning, & bombing.

This wrenching photo of a father grieving his dead child was posted on Twitter in a post about the current Russian bombing of civilians in Syria. In fact, it’s from the seven-week Israeli carpet bombing siege of Gaza in 2014 where Palestinians & several human rights organizations claimed Israeli bombers directly targeted children. The horror is that this could also be the West Bank, Kashmir, Arakan state, Iraq, Syria, Yemen, Somalia, Libya, Afghanistan.

As the oppressors see it, terrorizing, disabling, or killing children is a way to end future defiance & resistance of the oppressed. Their terror of & violent obsession with children is a phenomenon witnessed also in the apartheid (Jim Crow) era of Black oppression in the US. Our response must be to oppose war, occupation, genocide because the protection & defense of children is the most elementary human decency. There are no exceptions or mitigations to our opposition such as those introduced by Assadists, fascists, nationalists.