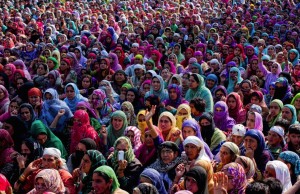 In preparing a post about the death of Kashmiri activist Irshad Ahmad Ganie, there was a dearth of information about who he was. Media reports were vague on every detail including the date of his death. The primary source of information was Indian police officials in Kashmir who labeled him a top official & operative in Lashkar-e-Taiba, identified by the Indian government as terrorist. He was accused by police of involvement in several violent incidents & had a bounty on his head.

He was killed by Indian occupying troops in a shootout in early September & his funeral was held September 13th. This photo of his funeral represents the respect he was given by Kashmiris as a freedom fighter, not a terrorist. Indian military officials managing an occupation force of 700,000 troops have a vested political interest in portraying him as violent–in exactly the same way Palestinians are portrayed by Israel.

The truth is the Indian occupation of Kashmir is brutal & employs mass murder & graves, rape, torture, mass incarceration, 45,000 disappeared, hundreds of extrajudicial assassinations. For Indian occupying officials to call an activist a terrorist–even if he engaged in violence against the occupying forces (& there is no evidence he did)–is nothing but horse manure & propaganda. The kind we know so well from Israel.

Kashmiri activists who engaged in guerrilla warfare once numbered near 30,000 but over a decade ago most abandoned that strategy because of the overwhelming force of the occupation. Of the 700,000 troops deployed by India, 100,000 are engaged in surveillance activity. Poorly armed & trained activists wouldn’t stand a chance against such a force. Activists today are stone-throwers like Palestinians, unarmed against one of the mightiest & most barbaric militaries in the world. It is even now called the Kashmir Intifada.

It may be hard for Indians to squarely face the barbarism of their government in Kashmir. Those who live in the US fully understand the trauma of doing so since we’ve lived our entire lives in the shadow of US military aggression. But whether you believe Kashmir belongs to India or whether you believe it should have self-determination & independence as Kashmiris demand, no one of good will can tolerate what the Indian military is doing to the people of Kashmir. Is owning Kashmir as an Indian state worth such human suffering? What’s in it for Indians to cling to outworn notions of nationalism?

Once again, the people of Kashmir have stood alone too long & suffered the burden of a news blackout due to Indian censorship. There must be an international movement so that every time an Indian official shows up in our countries, they are greeted with placards demanding “End the Indian occupation of Kashmir!” “Self-determination for Kashmir!”

We also honor Irshad Ahmad Ganie as a freedom fighter. May he Rest In Peace.