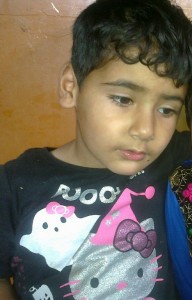 This little Kashmiri boy is three year-old Burhan Bashir who was injured in an attack last Friday that killed his father, 38 year-old Bashir Ahmad Bhat. Unknown gunmen–most likely Indian paramilitary assassins–threw a grenade & then fired a volley of bullets at them. The father, a former political militant, was returning from evening prayers & picked up Burhan, a nursery school student, from a shop where he had left him.

Burhan, not realizing he was injured & likely in shock, walked home where his family saw the little guy was bleeding & took him to hospital where he died. He
was buried next to his father today.

We should take a moment to honor this little boy’s memory. May he Rest In Peace. We should also honor the hundreds of thousands of children of Kashmir, Gaza, Yemen, Syria, Somalia, Afghanistan, Iraq, & elsewhere, who are paying such a horrific price for neoliberal barbarism.

Those gunmen will likely never be hunted down & prosecuted. That is why we must rebuild the international antiwar movement. One of our chief demands will be “End the brutal Indian occupation of Kashmir!”

Kashmir will be free.